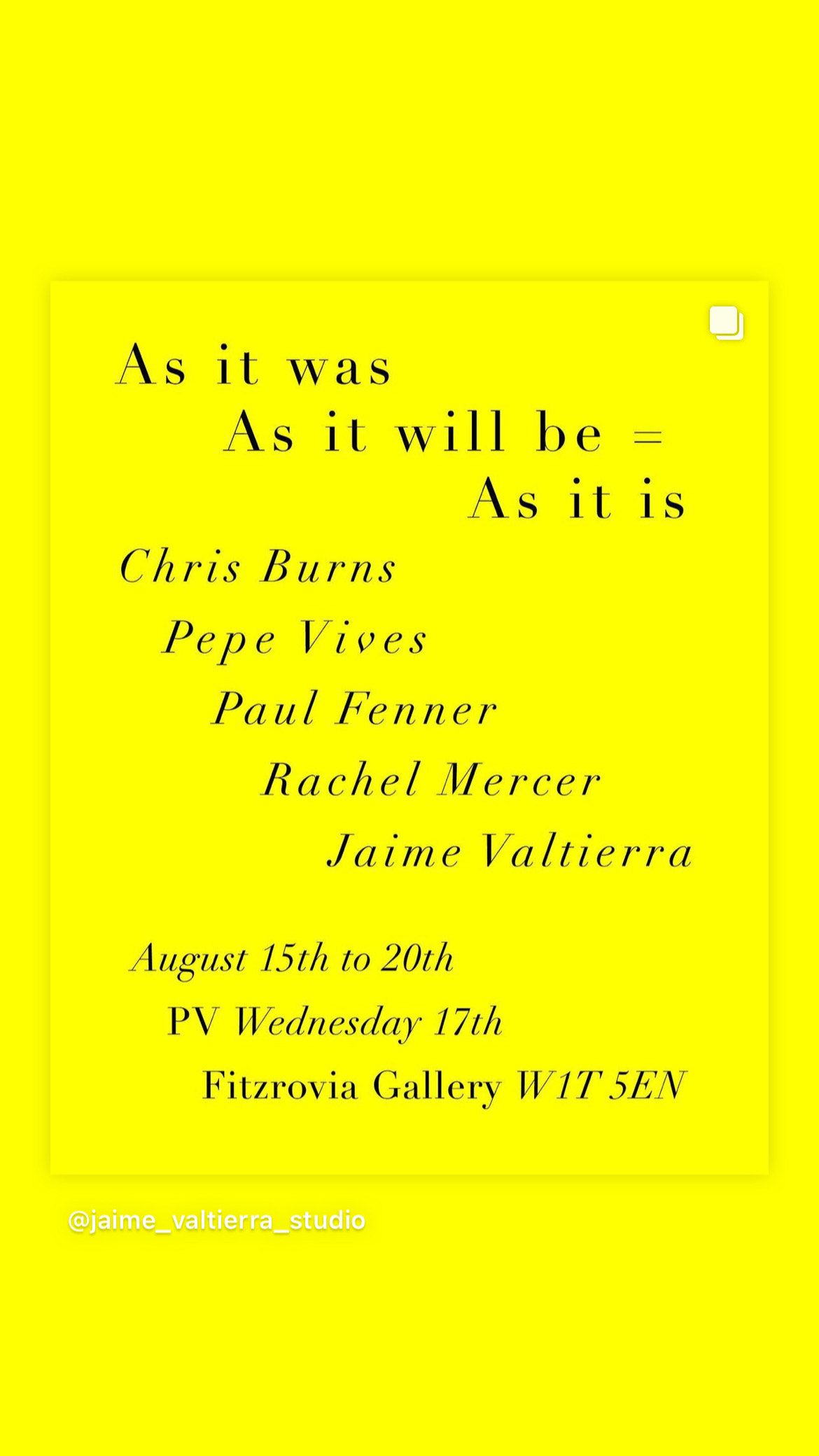 As it was, as it will be = As it is, is an exhibition of new works by five painters engaged in a process of direct experience, mark making and discovery of the image. The works exhibited lie between abstraction and figuration, each approach creates a conversation between materiality and subject matter. The artists are further united by their engagement with the emotional act of painting and their sense of play.

Chris Burn’s paintings are unashamedly childlike in subject and iconography. Figures and objects are seemingly weightless or perhaps mid-fall. Painted with brutal force and abandon, buoyed with joy in the poster-paint colours and cartoony characters, his work reflects a passion for experimentation and directness.

A similar approach is found in the paintings of Jaime Valtierra which present themselves with impressive force and power. The images come screaming into existence like a newborn child. The figures are modern statues, their limbs jut out creating shapes and spaces within the painting. His works on show reflect recent themes of family life and memory.

In the works of Paul Fenner memories of people and places are also a recurring theme. The spaces become distorted and compressed. In ‘Wrestlers in a landscape (Jacob and the Angel)’ there is ambiguity between inside and outside space, which creates a sense of dislocation and movement within the works, echoing the experience of the modern city.

Rachel Mercer’s paintings juxtapose everyday scenes and classical themes creating haunting images where the subject fades into the sensuality of the medium. The figures in her work move and dissolve across the canvas, simultaneously creating a sense of disappearance and presence.

Pepe Vives‘ improvisations in monochrome are joyful in design whilst simultaneously gritty and dark. The abstract, unnamable forms vibrate, pushing and pulling in space. Pepe works intuitively often motived by a movement or a feeling, completing the painting in one sitting without over-painting or reworking the paintings are records of a unique performance.

Mercer holds a BA from Cardiff School of Art and MA from The Royal Drawing School (2013) Based in London she has exhibited in the UK and China.

Stand-out exhibitions include Christie’s London in 2013; Mercer Chance and Mandell’s Gallery in 2018; San Mei Gallery in 2019; and Carousel Gallery and Coventry Cathedral in 2020. Shortlisted for the Ruth Borchard Prize (2020) and Hampstead Art Society prize (2022).

Fenner graduated from The Royal Drawing School in 2012, having previously studied Fine Art at Newcastle University. He has exhibited widely in the UK and is currently based in Norwich. Paul received the Richard Ford travel award in 2012 to Madrid, and the following year traveled to India to participate in the Royal Drawing School’s International Teaching and Art Residency. In recent years Paul has shown several times in the RA summer show and had solo exhibitions at SG Gallery in Venice in 2015 and Mercer Chance Gallery in 2017. Shortlisted for the Trinity Buoy Wharf Drawing Prize 2020.

Vives moved to the UK late in his childhood to study at Sherborne School. He later on went to study a BA in fine art at Reading University in 1998 and completed a MA in Aesthetics and Art theory at Kingston University London in 2013. He has exhibited internationally in galleries such as Horrach Moya, APT, Fundacio Caixa and, Kewenig Gallery alongside artists like Marcus Lupertz. He has also participated in international art fairs including Arco in Madrid.

The artist’s work is found in private collections worldwide.