Zlatena Atanasova
Zlatena studied painting at The National Art Academy in Sofia before moving to London. She has taken part in many Art events and Group exhibitions in Bulgaria and abroad . Her paintings can be found in private collections in Bulgaria, France, USA, Italy, Germany and UK

Claire Blustin
Claire is currently a Visual FX modeller for features. Work ranges between creature and character sculpts, photorealistic animals, anatomy, actor digital doubles, props and set extensions. Recent film credits include Fantastic Beasts and Where to Find Them, Alien: Covenant, The Legend of Tarzan and Paddington 2. She spent 13 years prior to that working as a video games artist, primarily character work for AAA Xbox and PlayStation titles. She studied Computer Visualisation and Animation at the NCCA. Much of her spare time is spent drawing and she has a particular interest in dark and melancholic imagery.

Ed Bucknall
Ed practices as an architect in London, whilst sketching and painting for pleasure. He uses a mixture of mediums on board and marble to create his unique and exciting art.
Ed has exhibited at The Brunel Museum gallery, Rotherhithe (solo show 2017) and as part of group shows at: Candid Arts – Angel, Camden Image Gallery – Camden, Leyden Gallery and The Old Truman Brewery – Whitechapel and the Nolias Gallery – Southwark.

Mark James Facer
Mark is a retired engineer. He was a Director of local firm Arup before moving to Mott MacDonald. Mark has been involved with exhibitions at the National Portrait Gallery, Manchester City Art Gallery and the Osaka Bay Maritime Museum – he has been responsible for air conditioning them all. Mark now spends his time fine tuning his windsurfing and art skills.

Vanessa Hodder
Vanessa loves playing with Colour.
She is not formally art trained but draws from her eclectic career that started in Architecture before moving into toy design for Sindy and PollyPocket, then design education, and has recently started her garden business www.landgirlsgardens.co.uk.
Vanessa has exhibited in joint shows with Drawing London on Location art group including at Pump House gallery, Battersea. She is also collaborating on a joint publication of Wren churches sketches due out early 2018.

David Lingham
David studied at the Central School of Art and Design and now paints from his studio by the Thames.

Debra McFarlane
Debra McFarlane is a freelance illustrator and artist, who studied at Kingston University. She has illustrated 10 books for The Folio Society, including ‘Peter Pan and Wendy’, and several commissions for the Radio Times, and Templar Publishing. Her book illustration work is exhibited at The Illustration Cupboard Gallery in London.

Chris Rangel
Chris is a retired Corporate Bean Counter, who’s taken up abstract art to subsidise his meagre pension! All reasonable cash offers for his Masterpieces will be considered! Retiring with attitude!

Will Shüler
Dr Will Shüler lectures in the Department of Drama, Theatre, and Dance at Royal Holloway, University of London. He recently published a chapter on ancient Greek choral training as a surrogate military training in ancient Athens in the edited collection War and Theatrical Innovation (Palgrave 2017). Will minored in Art at Wagner College in New York City; this is the first public showing of his work.

Keith Slote
Keith is a Production Designer and Art Director in Film and TV. Trained in film at the Royal College of Art. Recent credits include Citizen Khan, And Then There Were None, and Call the Midwife. Has exhibited paintings at the Mall Galleries, the Pump House gallery, Battersea, and the Sunday Times Watercolour competition. 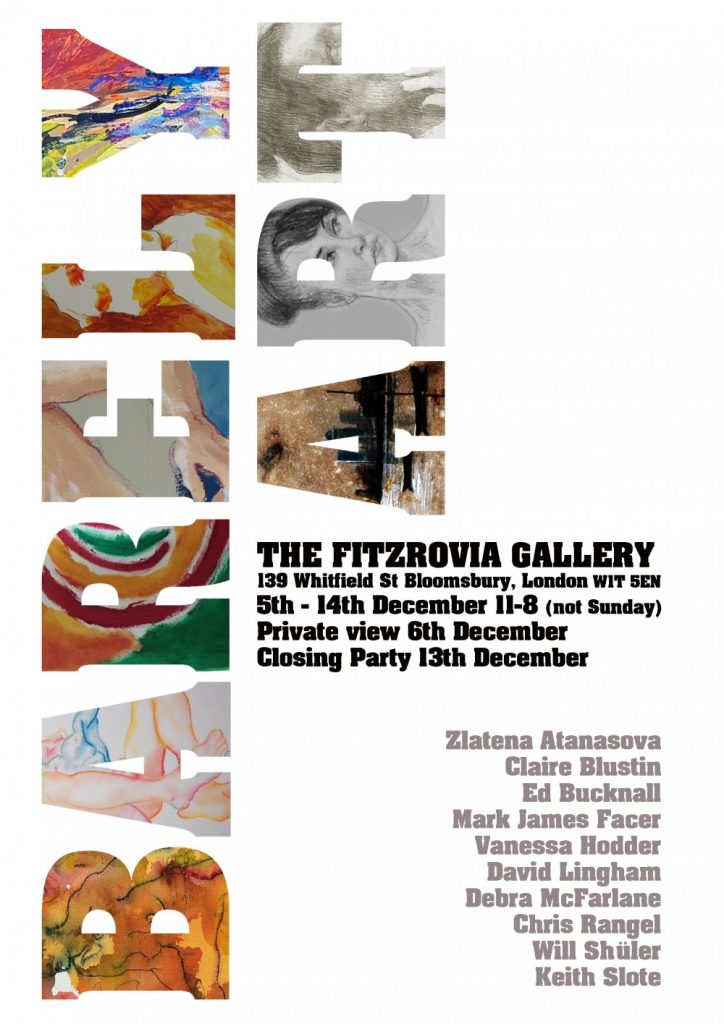