Beneath the Moon and Under the Sun – Maureen Nathan 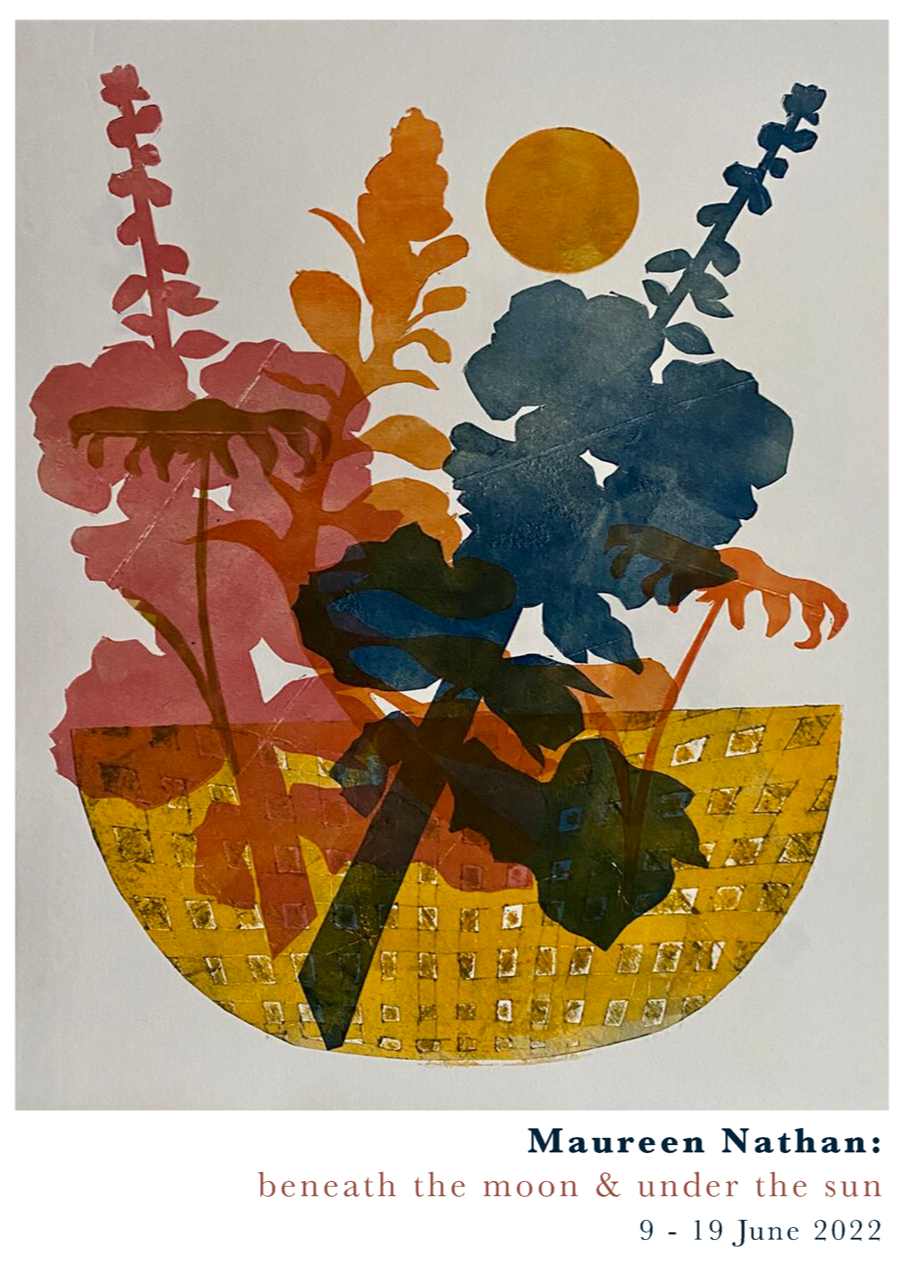 Exploring and responding to the world around her, Nathan’s series of artworks bear witness to the outbreak of Covid and the months following. Opening with solitary silhouettes in moonlit gardens, tangled branches cloaked in darkness and obscurity, and unfurling into a colourful confetti of blooming flora, ‘Beneath The Moon & Under The Sun’ puts into visual form an unconscious timeline that maps not just night and day or the changing seasons, but Nathan’s own illuminations.

Through a variety of mediums- painting, collage and printmaking- Nathan uses the physical environment as a vehicle for discovery and enlightenment, taking what’s in front of her and turning it into a beautiful, dream-like narrative. Reflecting on her surroundings, she says, “the natural world steadfastly follows its own rhythms, season after season, on the land and in the sea, and is an endless source of inspiration and solace.”

Short Essay
The flora and fauna depicted in Maureen Nathan’s prints and drawings are not bound by a particular setting. Rather than time or place, we are asked to contemplate the interrelationships between the artist and her subject matter and between the subjects themselves. The monotypes in this exhibition, many of which incorporate collage, were inspired by objects Nathan collected during her recent residency at the Cill Rialaig Arts Centre on the southwestern coast of Ireland. Beach pebbles, seaweed, and shells—valued by the artist for their form—converse with one another from a distance in works such as “Home Again” and “In the Pink.” There is a feeling of air and light in such pictures; an etherealness reinforced by the lacy structure of a recurring form that can be read as a shell in some of the prints and as a vessel in others. “Midden” and “insert title,” appear more like Rorshach tests; their compositions marked by the layering of objects almost to the point of non-recognizability (the latter piece, with its central crease, is especially evocative of inkblots). Nathan sets her printed and collaged forms on unadorned fields of white and unbleached paper, creating a lyrical pattern of surface decoration that can also be seen in her large-scale drawings.
The works in Beneath the Moon and Under the Sun were created intuitively without a predetermined plan. For the monotypes, Nathan uses mundane materials like Tetra Pak cartons, which she cuts and etches before inking them as plates. Each unique print is the product of multiple passes through the printing press. Nathan composes and determines the palette as she proceeds, incorporating additional plates with each pass. The result is an ever changing meditation on shape, color, and pattern. What was once observed has been transformed by improvisation and an exciting element of chance.
-Nancy Gruskin, American Artist

Born in 1954 on the West Coast of Canada, Maureen settled in the UK as a young adult. She divides her time between her home and studio in North London and her workspace in rural Dorset. Her work has been shown with the Royal Society of Portrait Painters, The Royal Academy, Wells Art Contemporary and the Royal West of England Academy.