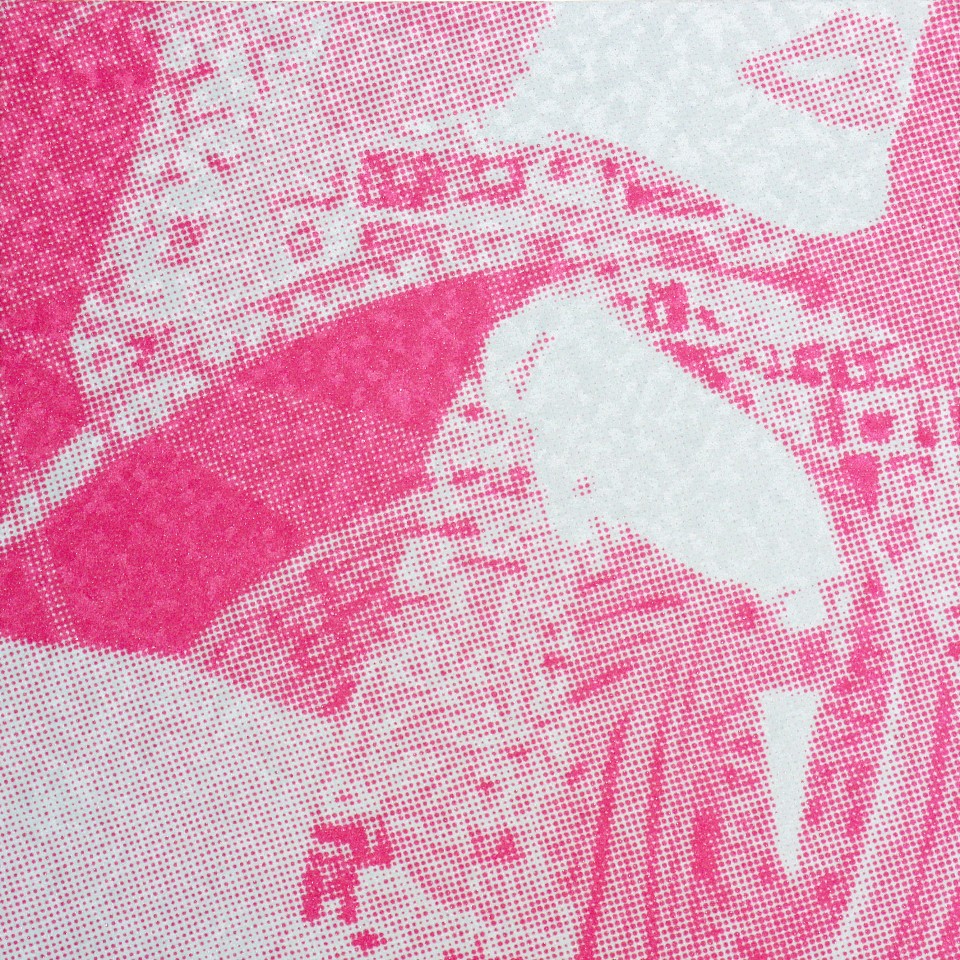 The Fitzrovia Gallery is proud to present Bijinga, an exhibition of new work by Japanese artist Toru Ishii, his first in London since participating in Light Sgrafitto at the Victoria and Albert Museum in 2017. Comprising twenty-eight female portraits with slight variations and printed in artificial colours, the presentation is a nod at both Japan’s century old tradition of bijinga and Andy Warhol’s serial portraits of Marilyn Monroe. Bijinga, translating as ‘pictures of beautiful people’, was a type of ukiyo-e, a genre in Japanese art flourishing in the 17th through the 19th centuries and popular in particular among the empire’s prominent woodblock printmakers. Ukiyo-e, or ‘’pictures of the floating world’’, depicted scenes from pleasure districts inhabited by a growing class of merchants. The prints, sold inexpensively and appealing with their portrayals of a hedonistic lifestyle, became a common feature in Japanese homes and eventually also made their way to Europe and Parisian flea markets as the trade between the continents grew. The French Impressionists, today credited with having revolutionised the European painting tradition, are known to have studied Japanese woodblocks as a source of inspiration for their cropped, square formatting.
Ukiyo-e, explored in its entirety by Ishii in previous series, was thus an early version of popular art; accessible to the masses and ‘a hybrid of artistic expression and a record of reality’ in the artist’s own words. Having studied the traditional dyeing technique of yūzen at university and introducing it into his own practice, Ishii was drawn to the bijinga: the subject, as a rule a female beauty, almost always wore a fashionable kimono. The production of luxurious kimonos peaked around the same time as ukiyo-e and their illustration in bijingas was both a form of advertising and part of the genre’s touching upon the forbidden: despite strict regulations and sumptuary laws, fashion flourished in Edo (present-day Tokyo) and the kimono was an important indicator of status. For example, red pigments extracted from the beni-flower were reserved for the uppermost classes. Yet, artists took the liberty of including red dyes almost identical to beni in their bijingas. These, supposedly, were brazen allusions to kimonos made by inventive manufacturers having found ways to achieve a similar red tone to please their clients’ wishes. Bijingas were thus undoubtedly part of the disruption of social divisions that took place during the Edo-period.

Akin to these early woodblock prints, at first glance Ishii’s bijinga are a vivacious display of cascading kimonos. Beneath the surface, in the colour and details of the pattern in the former and in the features of the ‘beauty’ in the latter, reside the artists’ remarks on their contemporary societies. Ishii even refers to his work as ‘Heisei ukiyo-e’, Heisei being the current Imperial reign name. His females mimic their predecessors in pose but in appearance they resemble glamorous Hollywood-stars with slender chins and seductive lips. Like Warhol, Ishii sources his images in popular press, reworking and transferring these to a support. However, for the present series, he created each unique image using digital tools, recreating the characteristics of yūzen dyeing which was also the technique used for kimonos. These have then been printed onto silk. One work in the display stands out, Beauty Looking Back. This portrait was made using the traditional method of itome yūzen, the first part of the term meaning ‘fine line’. The process involves laying down thin lines of nori rice paste on the silk, contouring the pattern created in the initial dyeing stage. Resisting dye, the nori leaves thin lines exposing the silk once removed after the final stage of dyeing. Like Warhol added touches of acrylic paint with a brush to his printed silkscreens, Ishii interrupts the mechanical printing process to leave his mark.

Bijinga introduces Ishii’s audience to his lengthiest series on a singular subject matter to this day, revealing the artist’s profound understanding of and engagement with Japan’s past. All artworks on display are for sale, contact the gallery for details.

Toru Ishii completed a Ph.D. in Textile Arts at University of Tokyo in 2014 and lives and works in London since 2015. His work has been exhibited internationally, most recently in Honolulu, Hawaii, and Victoria and Albert Museum, London. 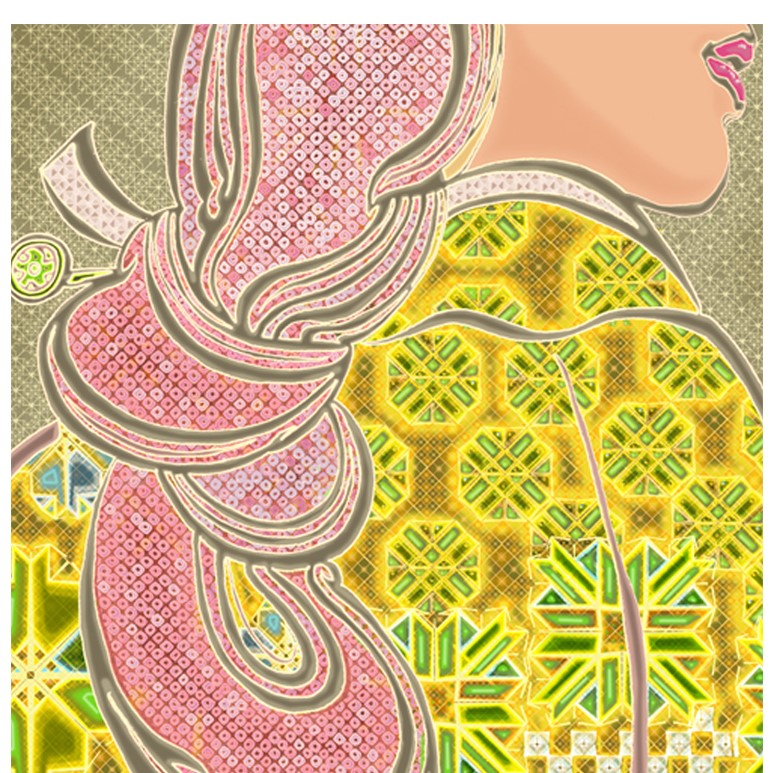 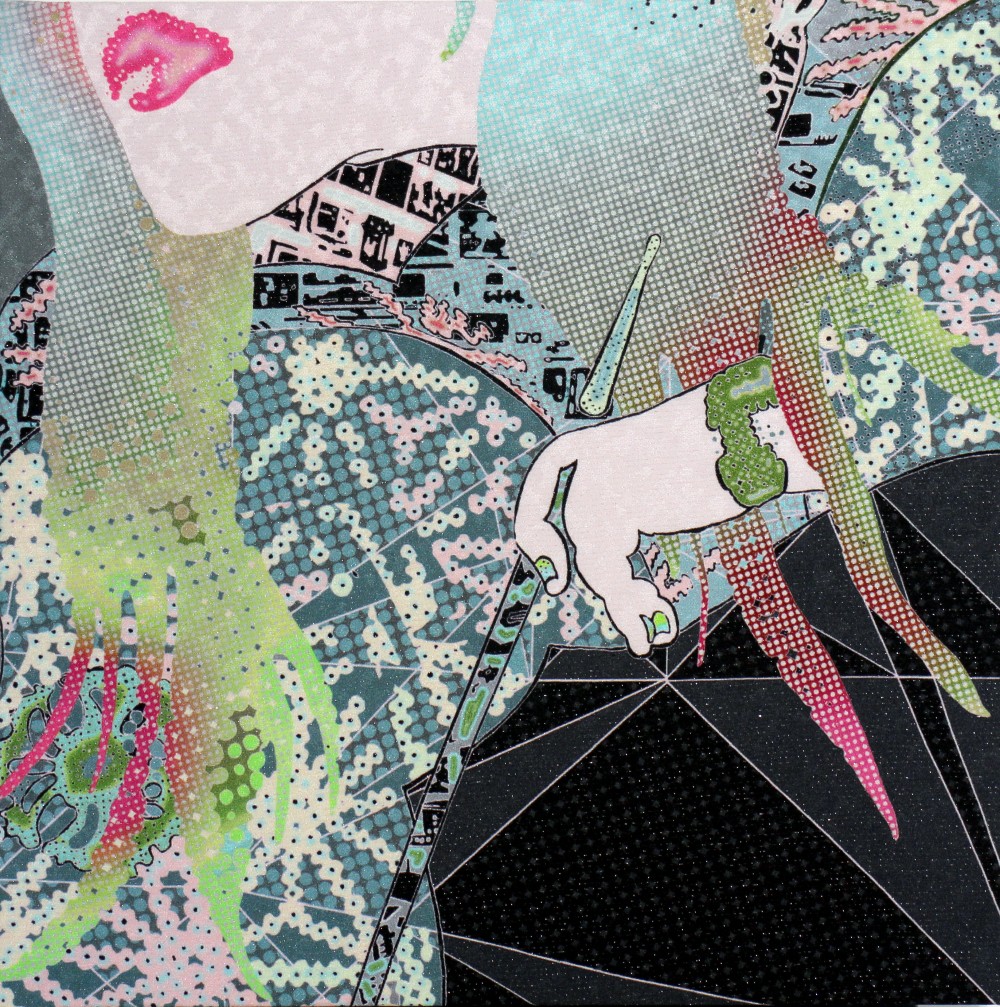 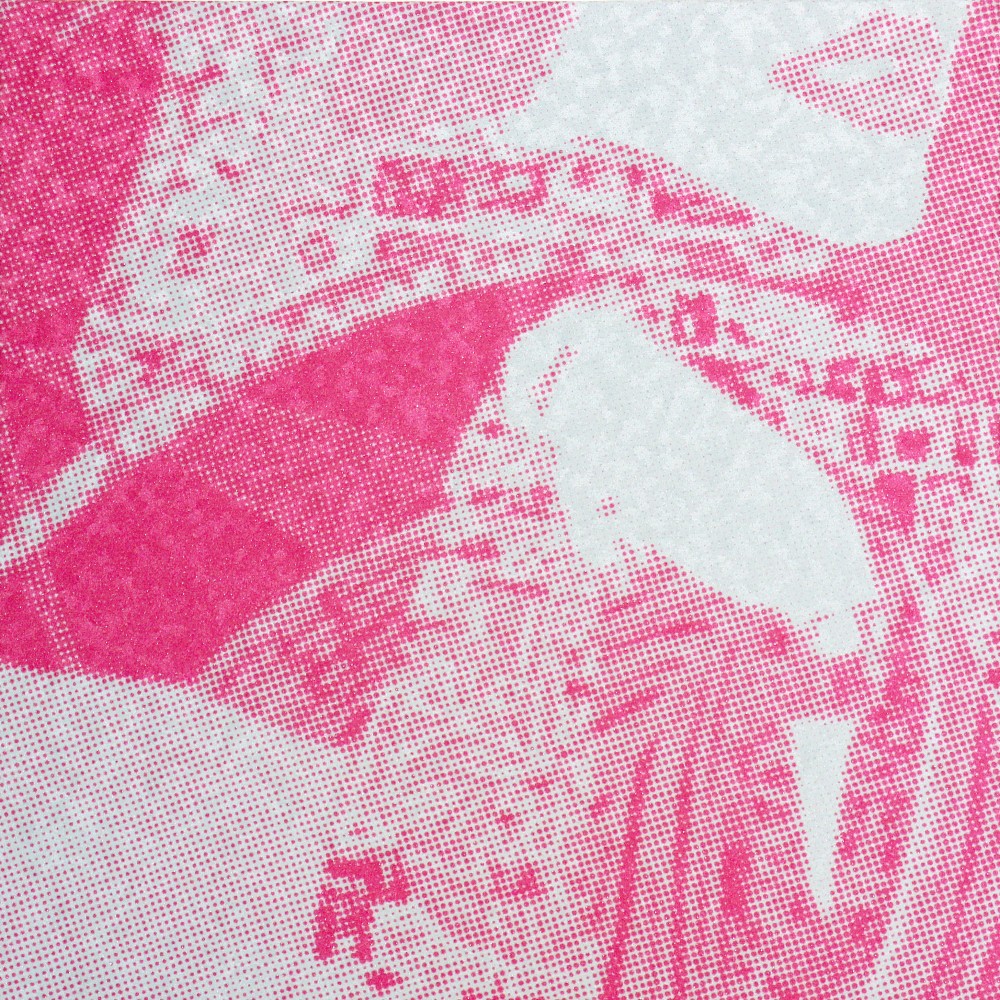