In a world defined by the invasion of technology and graphic neon colour, Annamarie Dzendrowskyj presents an alternative to this ‘reality’, one that is nebulous, a betwixt and between space. Dzendrowskyj sees this space, not as a void, but as a form of refuge from the stresses of 21 Century cyber-life. She seeks to examine and paint the ambiguous nature of life and this is reflected in her work which presents the emergence and dissolution of forms and settings. Exploring the tension between figuration and abstraction and the way in which the viewer understands or perceives time and place.

I see the space in my garden as a rectangular cuboid within which I recorded the flight of birds for one hour a week over the course of a year. I made these drawings on architect’s style tracing paper and pinned them away from the wall so that they ‘float’. All this work is based on this symbolism as well as its reality. I am interested in natural things, which make their own lines, as well as the process of drawing

Hanna ten Doornkaat
Untitled 360
Graphite pencil and acrylic on board
My work explores the process and meaning of ‘non-objective’’ drawing. It is a relatively intuitive and
open-ended process. The repetition of marks, lines and grids as a compositional format are regularly
recurring elements. As lines are imperfectly removed they create a history of layers compressed on its surface.

Objects in rubber
Rubber’s natural slightly undulated surface allows the work to be experienced not only as a painting but as an object in its own right. Rubber is a very special material: it is soft and flexible, black colored and heavy. I explore rubber in a number of different ways: I paint, I cut, I stick and I shape this fascinating material. As a painter, it has always been a dream of mine to be able to extend the paintings into space to make them three-dimensional.

I make marks, with ink or with stitches. The marks create spaces. These spaces are as important as the marks.

Buffy’s work is multimedia. She experiments with paper; cutting and tearing to create texture and depth. This piece has been inspired by her fascination for light and shadow. It is based on rock formations and artifacts hidden within. She likes to layer her work, to create hidden depths and to add a feeling of the unknown

Holding Lucy’s Hand
My focus is portraiture and figurative work. To improve my drawing skills and better understand the underlaying structure of the human form I have made a number of anatomical studies using male and female skeletons. This drawing is also a self portrait as the hand is mine holding Lucy’s. Lucy was named after the bones of first homo sapiens skeleton was found in Kenya.

My Bonsoir Pyjamas
The painting is about a long lost Polaroid I took in 1985. From memory, I wanted to explore recurring themes in my work of language, desire and reflection (physical and emotional). The image was taken late at night and combined words, which amused and intrigued me, neon lights and reflections. By putting down, organising and amending painted layers of my recollections the painting became a palimpsest of that moment
thirty one years before. I have recently rediscovered the photograph. 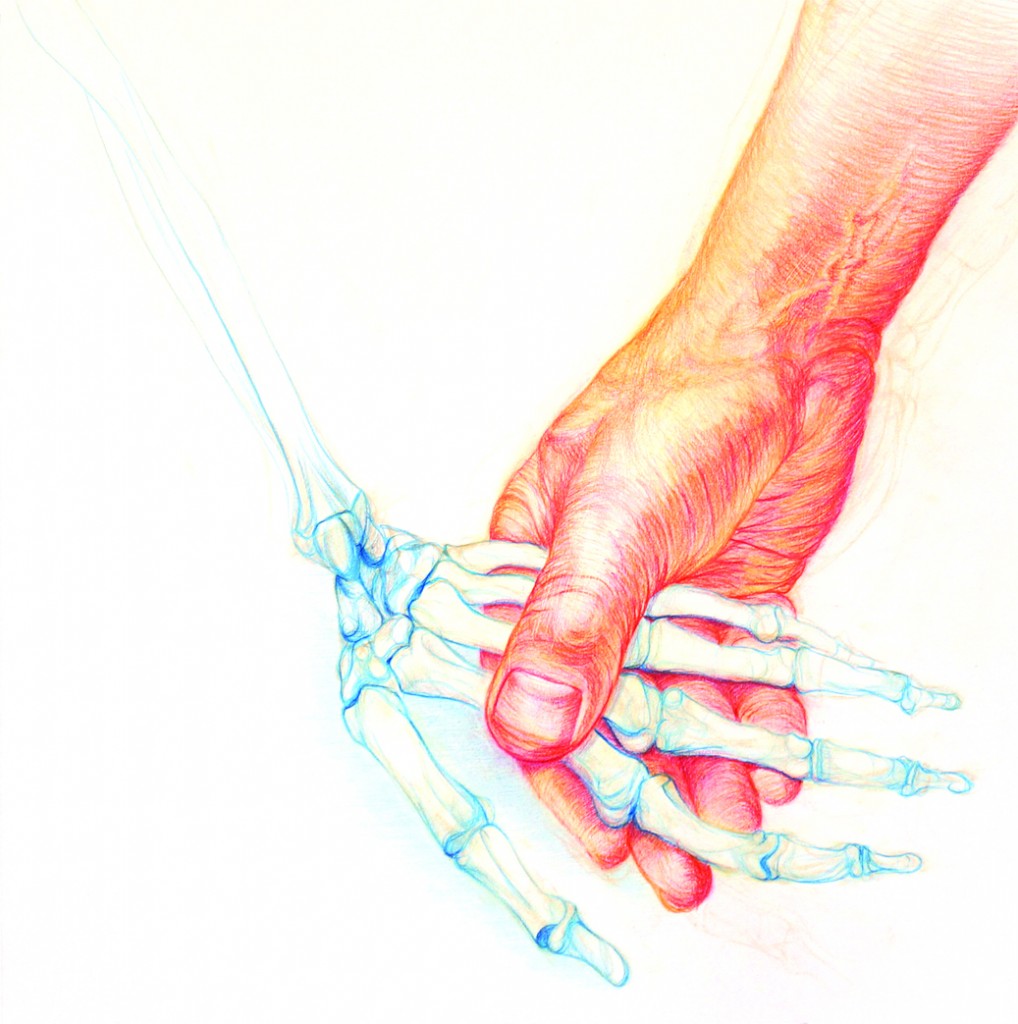