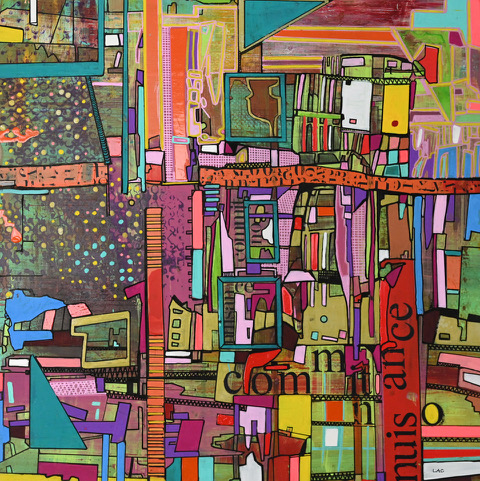 Born in France, educated in Paris and Britain, LAC’s first solo exhibition took place in India in 2003. Shuttling between countries and cultures, LAC takes the freedom to select materials from changing contexts, the result being a very distinctive style best described as contemporary, dense, vibrant, and evocative.

Her immediate environment, London, the embodiment of all the cities she lived in or imagined, and the everyday world are her uninterrupted source of inspiration. A simple bus ride becomes an opportunity to mentally collect lines, shapes, colours, and perspectives as the material for future paintings. The unsung urban traces grab her attention, reappearing as a touch of nostalgia in her work. As a result, LAC’s work can be seen as daily visual diary of life in a 21st century European city.

Her process can be defined by a permanent equilibrium between control and chaos. Control through the applications of various techniques and the use of mixed media such as sand, acrylic, pigments, inks, Posca pens, pastels, found objects, and collages. Chaos as the layering, mixing, superposing, leads to unexpected and dynamic combinations. Applying, washing, layering colours is a process which echoes what she feels is the essence of her experience as a human being: never being able to completely grasp a place or a person, questioning rather than building certitudes, the reality of the world she tries to understand always shifting. Recently LAC has extended the scope of her urban landscapes further than the canvas, by painting on tables, chairs, tin teapots and even shoes, reinventing daily life objects as unique pieces.

Her mixed media paintings have met collectors’ approval and curators’ interest and are part of numerous private and galleries collections, in Britain, in Europe and internationally as far as Japan where she was an artist in residence (Kyoto) in 2016. She just completed a commission for a collector in India.