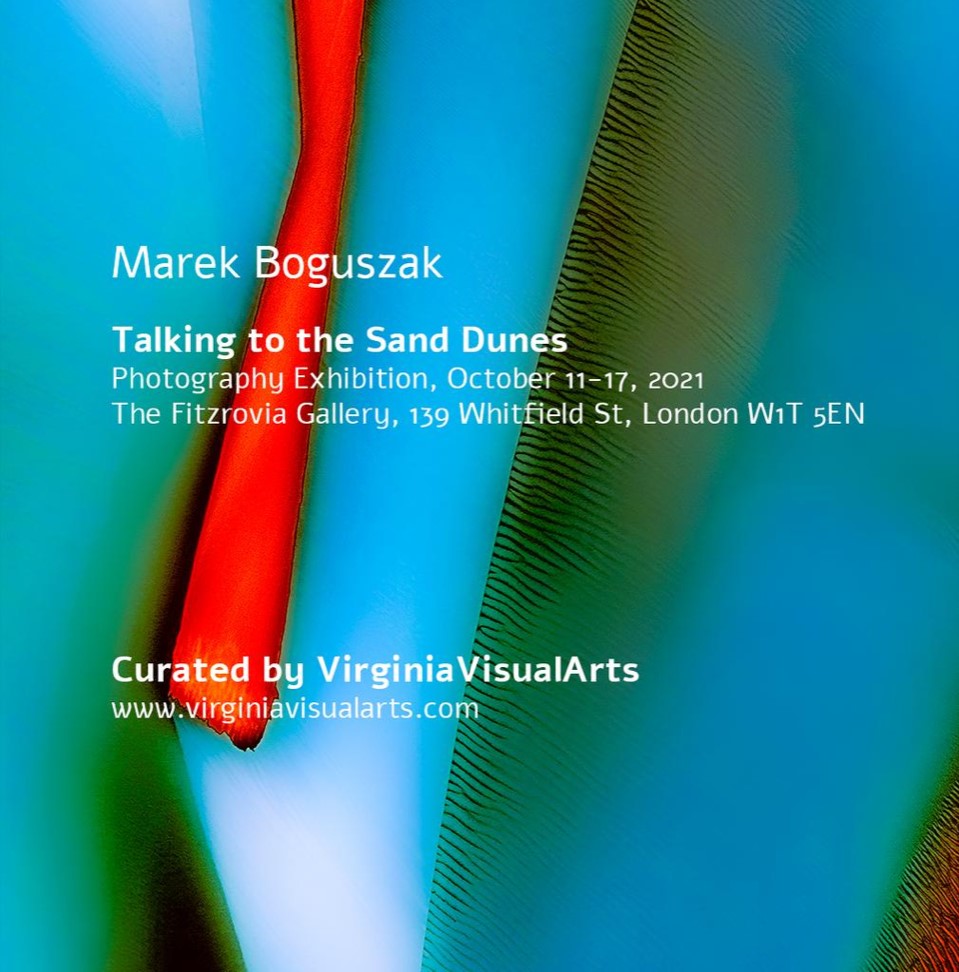 Marek Boguszak’s (b.1952) academic background (Ph.D and Master’s degrees) shaped his approach to photography. “He started his career as a classical photographer in the 1970s. Boguszak’s exquisite early works evolved among the aesthetics of Alfred Stieglitz’s (1864–1946) atmospheric city views and the straight prints from his protégé Paul Strand (1890–1963). During this period, the artist operated a progressive transition, from the painterly imagery of Prague’s misty streets to subtle abstractions through the subject matter’s isolation” (quote from art historian and curator Veronica Cuomo). Boguszak championed the analog technique and the darkroom’s development procedures with also experimenting in his latest work with state-of-the-art new contemporary digital softwares. The result of Boguszak’s black and white photography and his new colourful series are simply mesmerising, creating a feeling of escapism and wonder to the viewer.

The past five years, his artistic path experienced a radical switch to landscape abstract photography. In California and the Middle East, he discovered the sand dunes that became a great inspiration to his new series of work. The untouched nature of the sand dunes undisturbed by human activity, its endless pure perspective, its raw homogenous structural appearance, almost other-worldly aesthetics is what appealed the artist. The dunes shaped by the forces of nature, reveal through the camera’s lens the underlying order of the laws of physics engraved in their structure. In his exhibition,Talking to the Sand Dunes, in October 2021 in London the viewers will experience a series of serene poetic landscapes of Sand Dunes photographs. The photographs display the effect of Newton’s laws, the perfect order of nature with its undisturbed lines and shapes.

Awarded twice last year, in the 2020 Annual Photography Awards and the 2020 Tokyo International Foto Awards, the artist has received several awards and honorable mentions with TIFA, APA, IPA, Prix de le Photographie, Paris, FAPA and has had several solo and group exhibitions in London, Prague, Monaco, Zurich and Milan. His latest exhibition in Zurich was a total sell out. His upcoming shows are at the Fitzrovia Gallery, Saatchi Gallery, in London and the Czech Embassy in Switzerland. Marek Boguszak’s abstracts photographs raise awareness to nature’s transformation. Through his natural abstraction images, the viewer is faced with the immense beauty of nature.The photographer takes into custody a piece of the universal order in the noble attempt to prevent it from fading into disappearance.