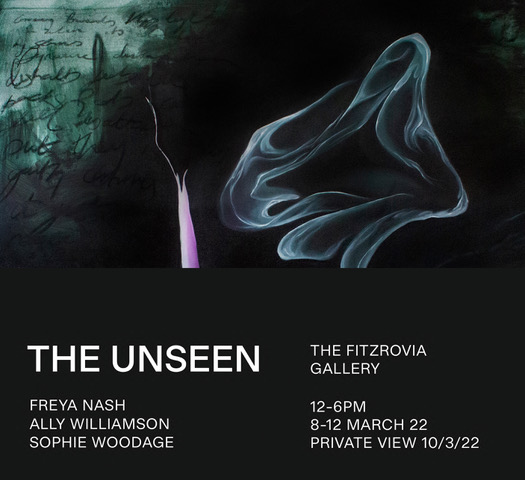 The Unseen brings together the work of three London-based mixed media artists. The following works convey expressions of the transient state of being; the temporality of reality. Physical and abstracted renderings of the unseen are given form into works of perceivable states that transmute, reveal and hide simultaneously.

Processes and hidden mechanisms lay beneath the surface, obscuring the senses and sight. Truth is often obscured by the facade of the final result. The continuous blurring between the honest and concealed, the spiritual and physical creates opaque landscapes.

To understand the abstract states of being, one must see that existence is both unity and dissolution. As we constantly contort the self to fit constructs, whilst yearning to find balance between structure and flow, dissipate to release. Learn to see what we have been taught to miss to find a clarity in the monotonous grind.

Within us, The Unseen bridges the physical, emotional and energetic bodies, wrapped up in the organic, abject form we call home. Outwardly it represents the big unknown, the mystery of experience, internally and externally. Discover the union of the sacred and sordid – where the ephemeral meets the solid, the grounded, the very human and the real.

Freya Nash’s work explores the incomprehensible meaning of life, attempting to pin down that which is felt and lived, into something tangible. Taking inspiration from dreams, internal reflection and reading-based theory is the root from which the weaving together, and exploration, of selfhood and existence begins. The way she creates her work has no fixed structure, leaning from deeply considered, reflective pieces to performative, spontaneous expressions. No sense of right or wrong, no hierarchy, as the chaos and refinery paradoxically conflict and compliment, mirroring the absurd complexity of what it means to be human and navigate the world around us. Carnal energy and impulse meet meticulous, thoughtful detail, reflecting the precarious balance within. Thus, representing that which borders the conscious and unconscious, absence and presence; the oscillation of the soul.

Aly Williamson’s works are produced in response to the ever changing and edifying social norms in western culture, be it physically, emotionally or mentally, this can be localised to an individual or spread across an entire class. Using a Neo Expressionist style Aly exaggerates and contorts limbs in order to mimic the cultural and economical hoops one has to traverse. With the primitivist form harkening to Greek pottery and Aly’s use of religious iconography the work appears as modern mythos, already archiving society’s current misadventures.

Sophie Woodage creates experimental structures that live and breathe together. Embracing the organic flow of natural forms and communication that unites seemingly inanimate objects, highlights the relationship between Mother Nature and manmade structures. These works are led by the elements, the transformative, shape-shifting alchemy that transmutes excess pressure into precious growth. Sacred space to reflect, Woodage considers life, body and soul. Unpredictable and chance encounters illustrate the intangible psychosomatic relationship that rules our daily life.