when you make sense I feel 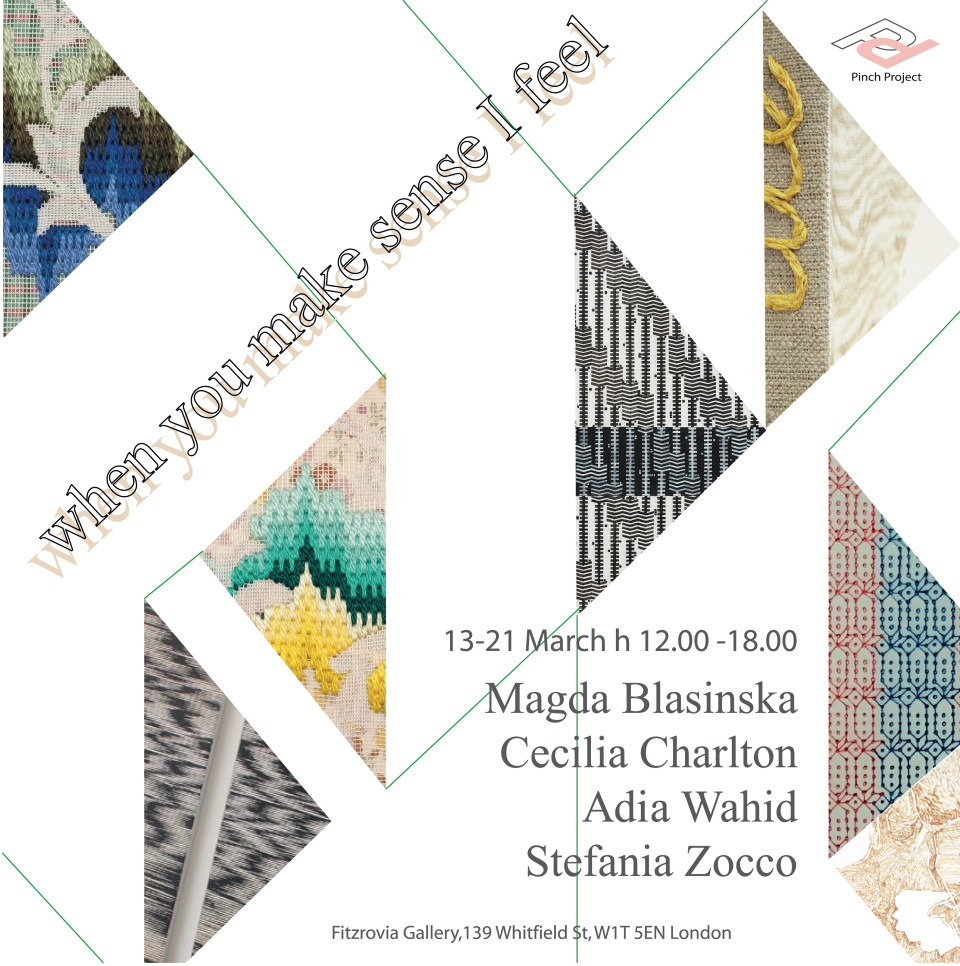 Digitality offers impeccable ways of patterning everyday life; guiding its contents by algorithms that subtract and impose. Patterns are composed from movements and behaviour and from there produce new patterns that guide and regulate. Yet we know little of the actual shape these arrangements take, before and in-between application. As the language of algorithms becomes increasingly invisible, order appears manifest, inevitable, not observed and belaboured.

We succumb to structures through their presentation of order. But considered instead in their discreet moments of inscription—when raw data goes through the looking glass and becomes a node, mark, or memory— brings something else. Within this lies certain minutiae, attached to rituals of repetition, questions of procedure, uncertainties of outcome, and the knowledge of tools.

The work of Adia Wahid, Cecilia Charlton, Magdalena Blasinska, and Stefania Zocco emphasise such minutiae. Each artist works with patterns, found and invented, planned and improvised. Wahid and Zocco turn to physical and virtual algorithms, in their ancient as well as new guises. Using imitation as a starting point, they imply a common ground that is rarely considered in human-technology relations; that of inscription and abstract thought. Like algorithms draw human behaviour in code, it is possible to copy the visual configurations of data—both have optical, aesthetic parameters. Blasinska and Charlton draw on traditional needlework. Paying attention to the permutation and glitches that these processes offer, new constellations evolve and gain an allusive quality. Charlton’s interrupted floral patterns and Blasinska’s almost-there figures suggest symbologies and narratives, embedded within surfaces that point back to the grid. Again, formations are related to the material organisations digital technology proffer; the building-block of the pixel, not as a model, but as a naturally occurring and analogous entity.

In J.M. Coetzee’s Elizabeth Costello, his main protagonist is adamant in the idea that it is possible to imagine what it is like being a bat. Those around her are derisive, meaning that since it is impossible to inhabit a bat’s body, it is also impossible to imagine being a bat. It is, and remains, completely other. For Elizabeth, such practicalities are inconsequential. Like any human, the bat is full of life—their shared existence within these premises, she states, is enough. Understanding the bat is beside the point; this knowledge will not make it more or less a being in the same world.

To possess sense is not always to know, to understand each part and its fulfilment in a structure. It can also be to lose recognition, to mimic, or to be conterminous. The abstraction of patterns excels in this (thus their important role in aniconic religions) containing, as they do, the edge-worlds of perception. Figures are captured rather than erased, shapes are suggestive, the repetition inducing. There is also distraction, the invitation of thoughts and restlessness. Algorithms have not traditionally existed to answer questions, but to form an anchoring to thought, to visualise and make concrete the movements that need to be preserved for rituals, beliefs, and governance. When we do not know about contents, they become as mantras, as labour, as rhythm. The works here approach this other life, where abstraction and repetition are ideas unto themselves. Mostly lacking the depth and cacophony of chaos, life moves through intricate patterns no one quite controls.