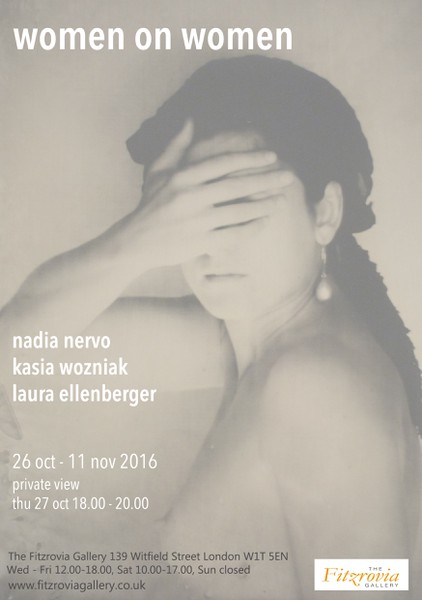 The Fitzrovia Gallery presents Women on Women, an exhibition exploring female portraiture through the work of three London based photographers. Comprising works created using various photographic processes, the exhibition highlights the vastness of the medium and its importance in changing the role of portraiture since its appearance some 150 years ago.

Women by Women is an attempt to define a relationship between the female artist and the female subject. Neither of the artists presented in the exhibition aligns their practice with a feminist movement. Still, their images provoke a reaction in the viewer, encouraging thoughts on how the subject is presented depending on who the artist is.

Focusing on seriality, the exhibition’s curatorial line takes its cue from the notion of repetition as pattern making. Subtleties in composition or format, reiterated throughout the series, capture and reflect the artistic approach of the woman behind the lens. Taking advantage of the immediacy unique to photography, these three artists create imposing, clever and foremost poetic portrayals of women as they know and envision them.

The works on display reflect different approaches to the female portrait. For the series I am, initiated in 2013 and ongoing, Nadia Nervo invites women to sit for her without wearing any make up. Concentrating on her models’ close portrait and stripping the image of narrative, she reveals both her subject’s vulnerability and challenges the viewer’s expectations on a portrait. Laura Ellenberger’s series This is not a Reclining Nude is the most recent from a collaboration between the artist and her long-time friend Alex. With a shared passion for swimming in the sea, and both being visual artist, Laura and Alex use the female body to depict gravity and balance. Referencing the passive pose of the reclining nude, the selected images show Alex employing every muscle in her body to not let go of an overturned sofa and fall to the floor. Kasia Wozniak’s portraits of Reba Maybury, created as part of fashion shoot, echo the original craft of the medium and undermine mainstream commercial photography with their unabashed overlapping of tradition and contemporaneity.

Kasia Wozniak’s photographic work deals with time and nostalgia. Fragmentation of the picture or actual print becomes a symbol for reminiscing, where objects or events are linked by our own imagination. A focus in her work is our ability to construe our own past by fabricating linkage and thus achieving a sense of logic and familiarity. Working with the 19th century Wet Plate Collodion process, Kasia sheds light on the historical aspect of the portrait genre as well as photography’s role in capturing individuality within the public. Her portraits often reference both contemporary life and past time, and thus question the notion of the photographic image as documentary and appear rather as points of departure for reminiscing. Simultaneously, the photographs are objects in their own right, reflective of a unique moment in time and impossible to repeat. As part of her practice, Kasia explores these different aspects of the photographic image and how they affect how we view photographs today. Kasia frequently participates in group exhibitions in the UK and abroad.
www.kasiaw.com

Nadia Nervo’s practice incorporates photography, video and performance. She received a Master’s degree in Art Communication & Design from the Royal College of Art in 2003 and has since then
participated in numerous group and had solo exhibitions, most recently ‘A Single Fleeting Moment’ at the Fitzrovia Gallery. In her work, Nadia investigates the relationship between photographer and subject, often working with strangers and exploring the nature of connections being made. Intimacy and trust between artist and sitter are key elements in her practice and fundamental to the viewer’s relationship to her portraits. Reappearing themes in her work are gender identity, the female body
and movement. She works primarily on analogue formats.
www.nadianervo.com

Laura Ellenberger graduated from the National Art School in Sydney in 2012, majoring in drawing and painting. Previously a decor magazine photographer, she combines her resources with an interest in experimental and historical photographic processes. In this latest series she is collaboratively exploring space through the use of layering, disruption of the surface, and fragmentation of the image, making reference to themes explored in the long history of art.
In the 80’s she was a documentary photographer in the Apartheid era in South Africa, and exhibited at The Market Theatre Gallery, Johannesburg.
www.lauraellenberger.com